I've admired the play of 19-year-old Connor Carrick this preseason. Good to hear that he may have made the Washington Capitals opening night roster. See Katie Carrera's post at Capitals Insider for more on the Caps roster moves. RMNB has as excellent breakdown on the how and why he's staying with the NHL club.
Posted by Lee Hernly at 10:45 AM No comments:

Washington Capitals owner said he had a HUGE announcement to make at this weekend's annual Caps Convention. Did he REALLY think he'd be able to keep it a secret as to what it is? Capitals Insider has the details. 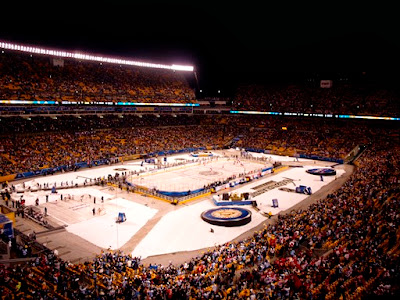 Alex Ovetchkin was mic'd up at the morning skate prior to the Capitals & Winnipeg Jets Kraft Hockeyville preseason game in Belleville, Ontario.
Posted by Lee Hernly at 7:11 AM No comments:

Washington Capitals Are Back on the Ice for 2013! (Photo)

The Capitals training camp schedule and roster can be found at this link. 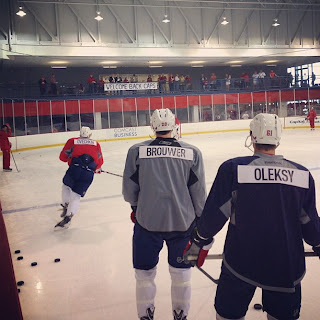 Via Washington Capitals on Facebook.
Posted by Lee Hernly at 11:45 AM No comments:

Shallow Nets Are Ready For the NHL in 2013

This should make for a few more goals...


It wasn’t one of the major changes made by the competition committee, but shallow nets will be making their debut in training camp.

The net depth will be reduced by four inches helping make the room behind the net slightly more spacious.

Aaron Portzline of The Columbus Dispatch spoke with former Blue Jackets forward, and current Director of Player Development, Chris Clark and finds out that while the change is subtle, the goalies will definitely take notice.

“You’re probably going to notice it a lot on wrap-arounds,” said Clark. “Those times when the goaltender gets his leg across just in time to cover the other post? Those might be goals now.

“The players haven’t seen them yet. The goaltenders haven’t played with them yet. But it’s going to take some getting used to.”

Posted by Lee Hernly at 1:45 PM No comments: